My role in the project

As a team leader, I was responsible for the overall integration effort and managing the research and development work in the group. I led and supervised a team of eight PhD students and two PostDocs. My main contribution was in 3D simultaneous localization and mapping (SLAM), with additional contributions to networking and 3D sensing.

The project aimed at developing an autonomous mobile manipulation platform for unstructured and rough terrain, to be used in a national competition. The robot combined off-the-shelf hardware with innovative software based on the ROS middleware to achieve the highest mark in the competition, with procurement and development done in only eight months. 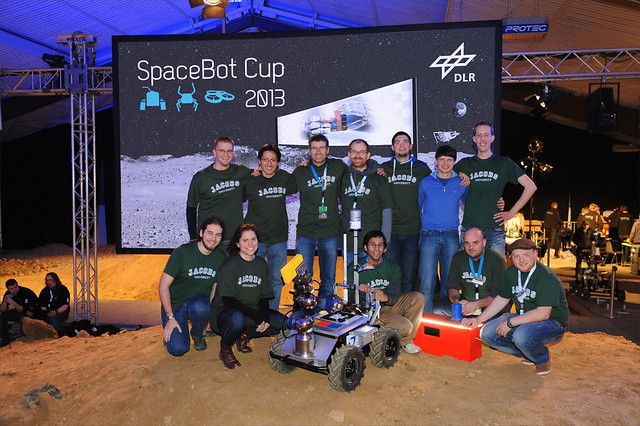 The Spacebot Cup competition was held for the first time in 2013. 10 teams participated in a two day televised event. The scenario was aimed at semi-autonomous mobile manipulation on other planets, which included a significant network delay and limited windows of communication with the robots.

Jacobs University focused on the software aspects, taking advantage of off-the-shelf robot hardware (Clearpath Husky, Schunk Powerball Arm, Asus XTion). In the competition, our team gained the most “checkmarks”, with which the judges marked the completion of several challenges, such as traversing soft or uneven terrain, finding objects, running under full autonomy, etc.